What words should I know before researching breast reconstruction options? 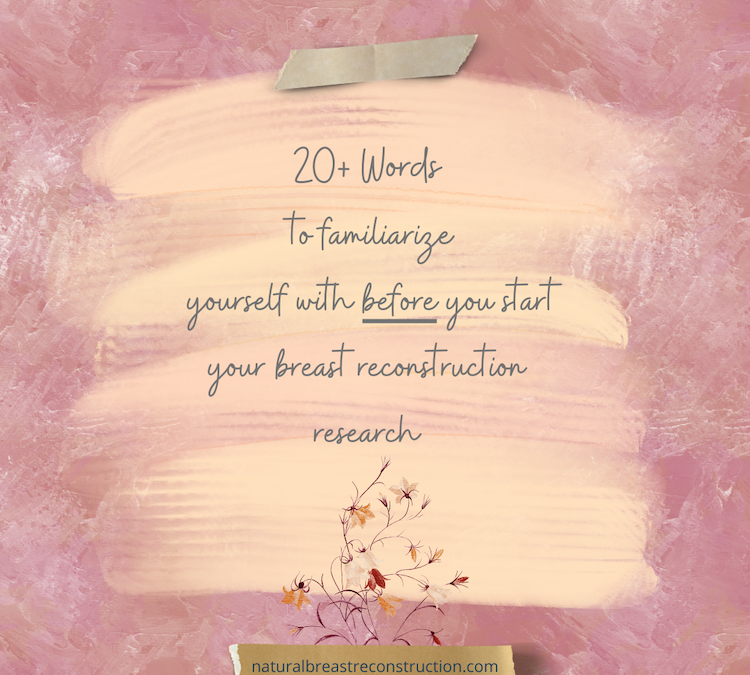 What words should I know before researching breast reconstruction options?

Also known as augmentation mammaplasty; breast enlargement by surgery.  Most often performed with an artificial implant either above (pre-pectoral) or below the chest muscle.

Also known as mastopexy; surgery to lift the breasts.

Reduction of breast size and breast lift by surgery.

A complication of breast implant surgery which occurs when scar tissue that normally forms around the implant tightens and squeezes the implant and becomes firm.

Deep Inferior Epigastric Perforator flap, which transfers skin and fat from the abdomen.

An area of your body where the surgeon harvests tissue needed skin, fat, and sometimes muscle to reconstruct your breast – commonly located in less exposed areas of the body such as the back, abdomen or buttocks.

A multidisciplinary and multimodal approach to perioperative care which not only expedites recovery but maximizes patient outcomes.

A surgical technique that transfers fat obtained by liposuction to enhance breast reconstruction by adding volume under the skin.

Surgical techniques used to reposition your own skin, fat and sometimes muscle to reconstruct or cover your breast.

Drugs and/or gases used during an operation to relieve pain and alter consciousness.

Blood pooling beneath the skin.

Sedatives administered by injection into a vein to help you relax.

A surgical technique that uses muscle, fat and skin tunneled under the skin and tissue of a woman’s back to the reconstructed breast and remains attached to its donor site, leaving blood supply intact.

A drug injected directly to the site of an incision during an operation to relieve pain.

The removal of the whole breast, typically to rid the body of cancer.

Profunda Artery Perforator flap, which transfers skin and fat from the upper thigh.

Superior Gluteal Artery Perforator flap, which transfers skin and fat from the buttock.

A seroma is a collection of fluid under the surface of your skin. They usually occur during or after surgery and fill space where tissue has been removed. Seromas are usually harmless and will heal on their own. However, in certain cases, they may require further treatment.

Superficial Inferior Epigastric Artery flap, which transfers skin and fat from the abdomen.

A surgical technique to stretch your own healthy tissue and create new skin to provide coverage for a breast implant.

Transverse Rectus Abdominis Musculocutaneous flap, a surgical technique that uses muscle, fat and skin from your own abdomen to reconstruct the breast.