In Her Words – Lyndsey

“Mom wasn’t supposed to live through breast cancer the first time, but she got a second opinion, and that doctor helped her,” explains the now 42-year-old. “A few years later, she got breast cancer in her other breast, but back then, they didn’t do double mastectomies.”

When the BRCA mutation screening became available in 1996, Lyndsey’s mom asked her if she wanted to get tested, but Lyndsey wasn’t ready. It wasn’t until she was in her 30s that she decided she was ready to take the test and find out her risks.

“If someone in your family had breast cancer and they are still alive, they test her first,” said Lyndsey. “Mom tested positive. And then I went and got tested and found out I was positive too.”

The mother and daughter decided to attend an educational conference designed for those who are facing hereditary cancer. It was there she met Dr. James Craigie, a surgeon at The Center for Natural Breast Reconstruction. She learned about the procedures they perform, including the GAP flap, where tissue is taken from the patient’s buttock area to complete the breast reconstruction.

Now Lyndsey had a big decision to make. “After watching all my Mom had endured over the years and the grueling after-effects, I decided to have a prophylactic double mastectomy to greatly decrease my chances of getting cancer,” she said. In 2011, she had her first surgery, and Hayes followed it up with a full hysterectomy in 2017 after her youngest daughter was born.

Her entire family traveled to Charleston to be with her and rented a house for the week. Her surgery wasn’t without its complications, though. Although the surgery went well, three hours longer than expected, the transferred blood vessels kept dying and Lyndsey had to be rushed back into surgery.

“I was in so much pain,” she said. “I kept going into surgery, and then having to start all over day one recovery, so we stopped and gave my body a rest and I went home with one breast, the one thing I didn’t want.

But Lyndsey said that it was God’s plan for her to go home and wait for three months. “I had started dating my now-husband, and luckily he told me he loves me with one boob, three boobs or no boobs.”   The surgery ultimately worked.

Hayes said her experience with The Center for Natural Breast Reconstruction was a positive one. “I felt really comfortable with them like I wasn’t just like a patient. They were genuinely concerned about me and trying to help me.”

Then, the unthinkable happened. Despite all of her precautions and surgeries, she was ultimately diagnosed with triple-negative metaplastic breast cancer in 2018, the day before her 40th birthday.

“I was in bed sleeping with my husband and I felt this lump in the middle of my chest,” she said. “I went and got it checked and then I ended up being there for four hours. I knew it wasn’t looking good, but it’s also triple-negative, which is really bad and the kind I have is very rare. There was less than a 1% chance of getting breast cancer after a prophylactic mastectomy and I was the lucky one,” she said.

Lyndsey did her research and found a doctor in Atlanta who did her treatment, including chemo and radiation. Today, she sees her oncologist every six months and they are watching a few nodules on her lungs.

“A lot of people don’t realize that you can still get breast cancer even after a mastectomy, and when I tell them my story, they are shocked,” she said.

Lyndsey calls her own story ‘scary’ and is apprehensive about giving out the details, but knows that her story can help someone in the same position.

“That fight may be over, but I will never stop fighting,” she said. “I have two little girls who could possibly have the BRCA mutation and many amazing pink sisters I have lost along the way that I will continue to fight for.”

This fight is the reason she joined Zyia so she could use the platform to help women feel empowered and confident, share her story and also be able to donate a part of sales towards research. 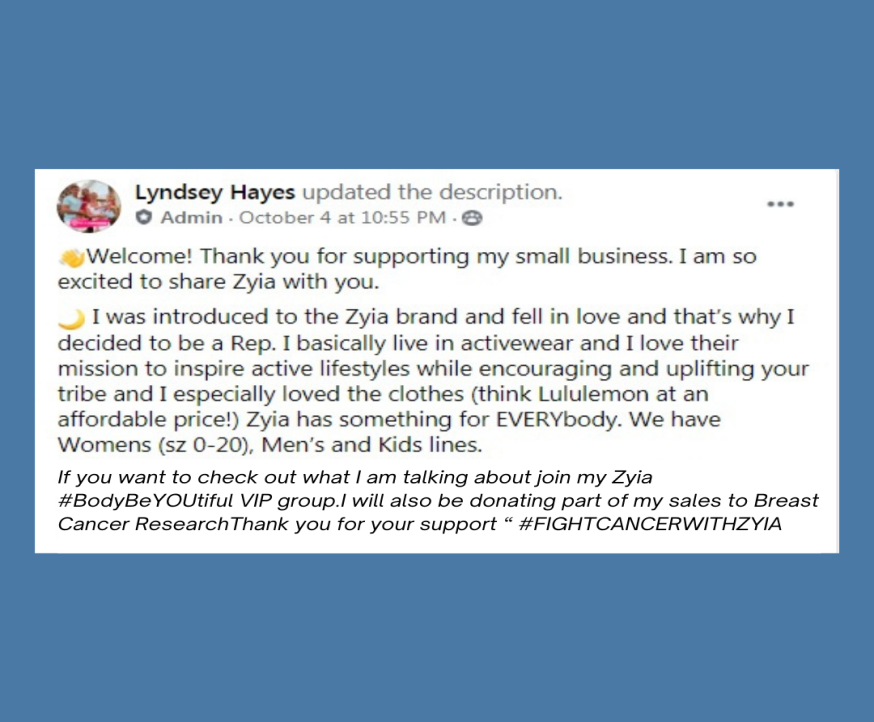