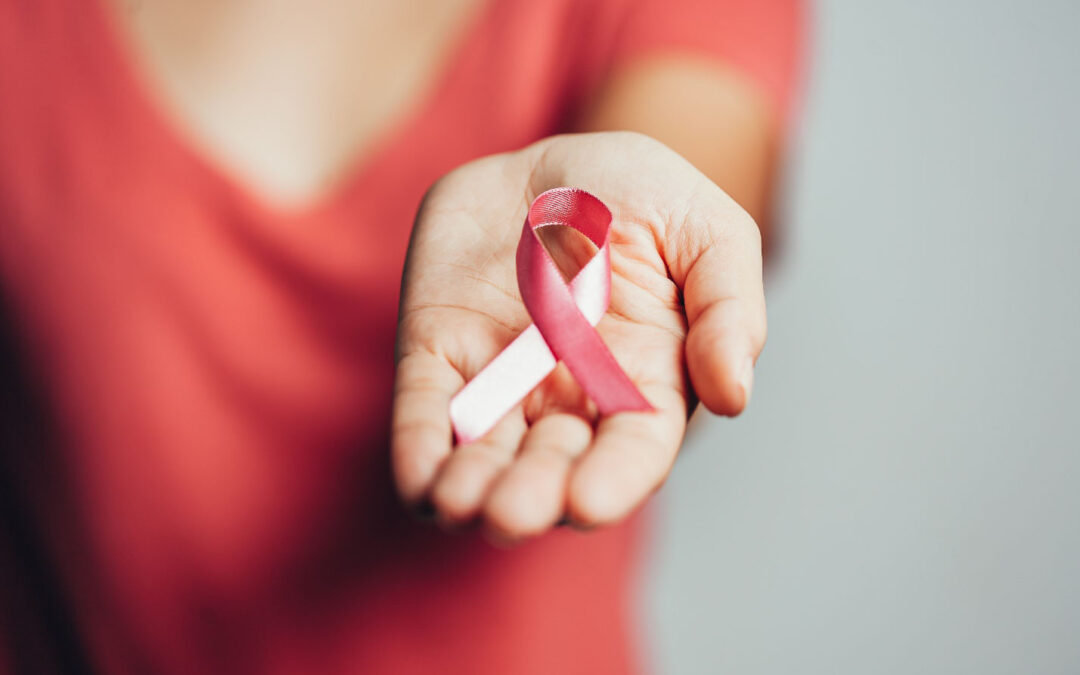 A photo might be worth a thousand words to some, but to Bonnie Vogeler, one photo was truly the inspiration that she needed.

Back in the early 2000s, Bonnie was in the greatest shape of her life. After her mom was diagnosed with breast cancer, Bonnie even trained for months to walk 60 miles for the Avon Walk for Breast Cancer fundraiser. Unfortunately, a few weeks after she completed this daunting trek, she found a lump in her own breast.

After a mammogram failed to show anything, Bonnie grabbed the radiologist’s hand and put it directly on the lump. The radiologist felt what Bonnie felt and agreed to do an ultrasound, which picked up her mass. A biopsy concluded it was Stage 3a lobular breast cancer.

The then-43-year-old opted to have a bilateral mastectomy, followed by implants. “I had the implants for years and they were fine, but the cancer came back,” said Bonnie. “I had radiation, but now the implants are about 12 years old and needed to be replaced.”

A few months ago, Bonnie underwent phase one of her DIEP breast reconstruction (deep inferior epigastric perforator flap) at The Center for Natural Breast Reconstruction. This advanced microsurgical technique is used to rebuild the breast lost to mastectomy. The procedure uses excess living fat from below the belly button, which gets transplanted to the chest to give the breast its volume and shape.

“You’re allowed to do next to nothing for what seems like an eternity,” said Bonnie, who missed working out and bike riding. “So, I started looking at the patient portal to whine about what I couldn’t do.”

It was there that Bonnie saw a photo of Audrey Rowan triumphantly lifting her racing road bike over her head. “Ms. Vogeler commented on the picture stating that she was four weeks post-op from DIEP and asked, jokingly, if she could lift her bike over her head yet,” said Rowen, PA-C at The Center for Natural Breast Reconstruction. “Over the next several weeks, we messaged back and forth through the patient portal about when she could start biking and she always had a great sense of humor.” 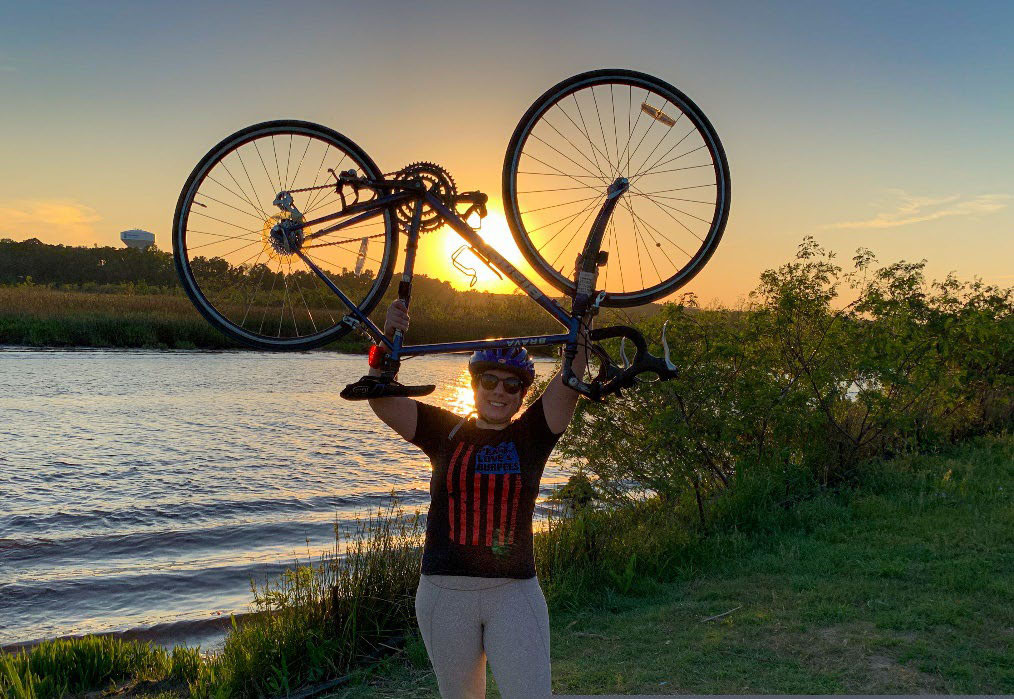 Bonnie first held the little bike over her head — which was actually a clock — as a joke, but she knew that she wanted more. “Your body has to scale back when you’re healing, but I knew I wanted to be back to this at some point,” said Bonnie. “My husband and I owned a tandem bike and I missed it, so I finally got to ride a little at the beginning of July. I took the bigger bike and held it up for about a minute. I knew I would be there again, even if it was just a little while.”

There was a time during her recovery when Bonnie couldn’t comb her own hair, and now at 61 years old, she was questioning the remaining strength of her own body. “As a matter of fact, these photos made me decide, even if I can’t get the biker’s high or a runner’s high, whatever you want to call it, I can be strong again. It may not look the same, but I’ll be able to get up off the floor without assistance. I’ll be able to open a jar of pickles on my own. So it was very empowering to lift the bike over my head.”

Those who know her weren’t surprised at her progress. “My husband told me ‘you can do that,’ and my kids just rolled their eyes and said, ‘well, mom, that doesn’t surprise us,’” said Bonnie, who just completed phase 2 of her surgery a few weeks ago. 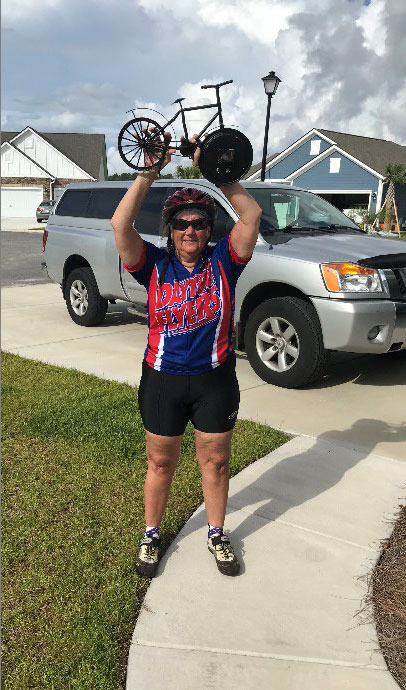 “Exercise just makes me feel so much stronger and hopeful.” 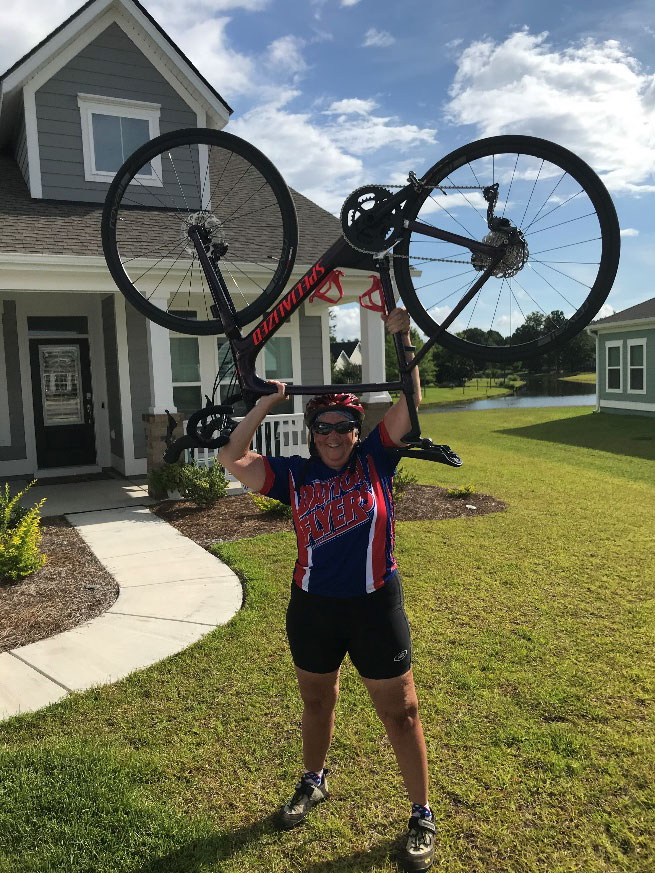 Audrey said it was a great feeling knowing that she inspired Bonnie to get back to doing what she loved. I think it’s a great example for all our DIEP patients that although the surgery comes with a long recovery, they can get back to the things they enjoy and live life fully again!”