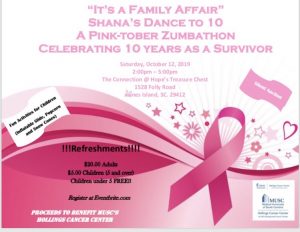 We’ve been thrilled to help Shana with goody bags for her October Celebration events for the past several years.    We’ve asked Shana to share her “In Her Words” story about how she was inspired to start and continue to host these successful fundraising events.  Be sure to mark your calendar for ZUMBATHON October 12, 2019!

I am a daughter. I am a mother. I am a wife. I am a Christian, a pharmacist, cousin, niece, aunt, godmother and friend. I am 42 years old ….and I am also a 10 year Triple Negative BC Survivor.

Never in a million years did I think that I would hear the words “You have breast cancer “. What initially began with swelling and pain under my left arm turned into an appointment scheduled at Hollings by my primary physician.

I still was not overly concerned. My 30 minute appointment turned into an all day appointment. I had an ultrasound and mammogram and was scheduled for a Biopsy of the lump found in my left breast and swollen lymph nodes under my arm. Before I even received the results, I knew that it was going to be breast cancer. I just had a feeling.

I was 32 years old with a 4 year old and 7 year old. I knew what BC was, but I had no idea about the multiple subtypes.  Since it was BC Awareness month, there were many specials on television. I was watching one that was about TNBC and the African American community. They spoke about the high mortality rate, high recurrence rate and the higher incidences in minority women.

When I got the results of my tumor, I prayed that it wasn’t TNBC. Hearing that it was TNBC felt like a death sentence. I then remembered the special taking about clinical trials. I realized that I needed to do all that I could to beat this!

I was diagnosed with Stage 2 TNBC. I had neoadjuvant chemotherapy, a total axillary dissection, a lumpectomy and Radiation.

“Hope and Fear can not dwell in the same place. Invite one to stay” Maya Angelou

My faith and family gave me the strength to press on. I never questioned God, never thought “why me?” My focus was on my children, family and becoming cancer free. I always believed that the final outcome of my treatment would be NED (no evidence of disease), and it was!

My commitment now is to educate and encourage! Along with my church (Folly Road Church of Christ), I have a yearly BC Awareness Event, Knowing Your Girls. It began as a Tickled Pink Reception and  has grown into so much more! We have had Painting for a Cure, Dancing for a Cure and this year a Zumbathon. We have many people in the community that help to make our programs a success, including The Center for Natural Breast Reconstruction and our partnership this year with MUSC Hollings Cancer Center.

“Each place along the way is somewhere you had to be in order to be here. “